Interview of Hélène AUBERT, who experienced the RIDEF long workshop "the democratic participation of the children" 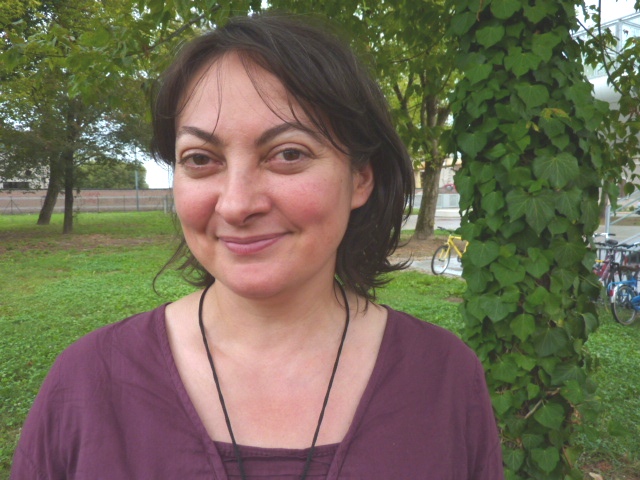 Hélène Aubert, teaching in a primary school located in an unpriviledged area, in Paris suburbs, came to the RIDEF in order to deal with her daily teaching problems. She also decided to follow this long workshop to be able to adapt to her own context and own pupils the general strategies developing the democratic participation of the children.

She's now leaving the RIDEF Italia  with pragmatic solutions but also and above all with a strong desire to commit herself in her district, to enlarge the children influence in the decision-making processes in her city, her team and her school. She was really moved by examples of children contributions to society.
She's now sharing with us her experience of the workshop and her plans for the next school year. She's so enthusiastic that we feel like imitating her  when reading her...

Hello Hélène, what's your opinion about the RIDEF long workshop intitled "democratic participation of the children at school and in the city ?" ?

I really appreciated the continuous setting up of democratic rules in the workshop itself.

Through many verbal incentives, Jean Le Gal made us understand that his own speech could be questioned and that his proposal could be challenged.

Indeed, he started the workshop by saying "as a coordinator chosen by the RIDEF team, I would suggest that we first decide how decisions will be made in our group".

This way of introducing things implied that another coordinator could have been chosen and thus, that something else could have been suggested for a beginning.  So we dared and asked him : "Why not start the workshop by reminding us how to ask for speaking? " Obviously, that's the way we would have started in our classroom with our own pupils. But Jean Le Gal answered :

"Because "how to ask for speaking" must be a decision we have to make in a participative way".

So, we took our time. We took time to express our ideas, to expand them, to discuss and debate, to listen to each other : in other words, we deliberated to be able to finalize this very first step of our democratic governance.

It really took a long while, but finally our group voted for "consensus decision-making", which is a process that seeks the consent of all participants. Both the decisions and the process of reaching them are defined as "acceptable" resolutions, which means that they can be supported by everybody.

Then, roles emerged in our small group : an information-seeker, that asked for proposal clarification, a decision process-assessor that asked "is someone against this proposal? " , a recorder, that kept the notes (minutes) of our meetings and decisions, a time-keeper, a "speaking-turn-keeper" ...

All our rules were written on a large paper sheet hanging on the wall. Everyone could refer to them ceaselessly. It happened when somebody behaved in a way that could have disrupted the group, for example by coming later from the pause as what had been previously decided ... And this simple way of refering to written decisions really worked !

According to me, this workshop was very realistic. All the difficulties I usually have to face with my pupils also occured in our group during the week, so I really could experience solutions. OK, I know that all the workshop participants were free to come and wanted to work, which is not always the case in a class ... I mean, during the workshop, we didn't really have to deal with the problem of group members focusing on preventing the group from  reaching its goal ... as it sometimes happens in a class...

As far as language problems are concerned, that also occur with our pupils, due to vocabulary and comprehension inequities for instance,  we also experienced them during the workshop, for we needed to translate.

We agreed that should someone feel unease with a proposal, then we would'nt go further. We would explain, clarify and relate the proposal to other member statements, until everyone feel at ease with it. The coordinator asked : "did I clearly express the proposal ? Does everybody agree that we are all discussing the same thing ?"

During the week, in smaller groups, we also shared  and analysed experiences and practices to impulse and maintain democratic participation of the children at school and in the city... Even in the city of Reggio Emilia.

Jean Le Gal was always stimulating us by providing helpful information and by sharing plenty of examples, chosen among others to incite us to assess our work by higher standard, to vary our reflection angles and to develop our imagination ...

I was really happy  when we studied varied cases of democratic participation of the children all  over the world. I enjoyed learning more about those countries where this right, recognized by the International Convention, for a democratic participation of the children in the decisions which concern them, is part of the syllabus.

Let me conclude by saying that I understood during the workshop how the possibility left to children to contribute to their decisions can bring changes to the whole society : a child proposal has led to a programme against illiteracy, a letter from a class pen-friend in a school has led to a recycling programme...