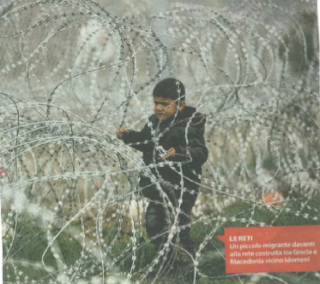 We were moved  seeing the image of Aylan, died on the Turkish beach,  we were moved seeing the baby covered with earth and mud miraculously saved by rescuers, whose bewildered look questioned us .

The commotion lasts the space of a day but children continue to get away, to die, to end up in the hands of traffickers.
The Aleppo horror is perhaps the greatest humanitarian tragedy since the beginning of the Syrian conflict, with thousands of people trapped in hell and the international community which remains inert.
Victims mostly civilians: women, children and unarmed men who are paying a high price for a conflict seemingly without end. Over half a million deaths since 2011 and half of the population forced to leave the country receiving, most of the time, unworthy welcome in Europe.
A war  simplistically presented as a war of "all against all" to mask the strategic interests of  politics powers in an area whose instability is functional to those who get rich with the war industry and the wild hoarding resources. The Daesh atrocities, jihadist fundamentalism that denies all freedom, arrogance and military policy of Assad and his allies, primarily Russia, the ambiguities of the United States and Turkey are the faces of one great war, fought primarily by multinational corporations and financial potentates for the expropriation of resources, and also he sees the 'Italy involved in the supply of weapons to countries that finance directly fundamentalism, such as Saudi Arabia, Yemen in the bloody conflict.
We must take to the streets to demand a halt to the horror of Aleppo and the immediate creation of humanitarian channels to allow the civilian population to take refuge in safe places. We demand to stop the war, bombings and massacres that continue to occur, the supply of weapons. We demand respect for the vital rights, we ask the European Union not to ignore the plight of refugees and to call into question the treaty with Turkey that allows it to manage migration flows from Asia to Europe.
As in every tragedy there are the boys and girls that  pay the highest price. Boys and girls killed, wounded, orphans, on the run, no water, no food, no school.
They make it less dignified  the life of each of us, marked by  the shame not to have them protected.
Children of Syria, victims of history and indifference of adults, they wonder us . They question especially those of us who, as teachers and educators, have  often looked for traces of "Tom Thumb in history" finding tragedies that showed boys and girls deported, closed  to work as slaves in factories and mines, orphans, arrived alone on our shores.
The story will not see us passive spectators in the face of the tragedy of the children and girls of Syria.